• Our April 2020 survey of airline CFOs and Heads of Cargo confirmed the sharp weakening in the Q1 business environment amid the spread of COVID-19.

The challenging business backdrop – including weakness in profitability – is expected to be maintained through the next twelve months.

• Passenger and cargo demand both collapsed in Q1, although the decline was more pronounced for passenger traffic.

Yield developments were mixed, with respondents reporting that passenger yields eased over the course of the quarter, while cargo yields increased.

• The views for the year ahead are mixed; while some respondents noted that airfares may decline to help stimulate demand and attract travellers, others mentioned that social distancing measures (such as not selling the middle seat) may force carriers to raise prices to ensure operations remain commercially viable.

• With the recovery in demand likely to be slow, 80% of respondents expect to have to decrease employment levels over the coming 12 months.

• A consequence of the upheaval in the airline industry is that respondents report a widespread decrease in input costs due to internal cost reduction programs and downscaling of operations, in addition to falling fuel prices.

• The impact of COVID-19 is obvious in our latest survey of airline CFOs and Heads of Cargo, conducted in mid-April. The majority of respondents (83%) saw their profits decline in Q1 – the largest share since the October 2009 survey.

While it may come as a surprise that 7% of respondents pointed to improving profitability for the quarter, this is the lowest share in our series which started in 2006.

The backward-looking weighted average score – which was already trending in contractionary territory in 2019 – also dropped to its lowest level since October 2009.

• Survey respondents are even more downbeat regarding the coming twelve months. 97% expect a deterioration or no improvement in profits over the year ahead, again, the worst outcome in the history of our series.

Note that in July 2008 – just before the previous large-scale global crisis – 90% of respondents were expecting a deterioration or no improvement in profits. As mentioned above, 92% of respondents subsequently reported financial losses in Q3 2009.

How has profitability changed? How do you expect it to change over the next twelve months? • In April, 84% of those surveyed experienced a deterioration in passenger volumes, by far the largest share in the history of our series (the previous maximum was 68% in July 2009).

This is a sharp increase from an already above-average 27% in the January survey. This month’s outcome resulted in a dramatic decline in the backward-looking weighted index in April (to just 14), even though it had been on a downward trend since early 2018.

• For the year ahead, 83% of survey respondents indicated that passenger demand was likely to diminish further. This sits in contrast to the trend of the past few years, when respondents had typically been upbeat about the future.

For example, in our previous survey (January 2020) only 3.8% of respondents expected a decrease in demand this year. The forward-looking weighted-average score also plunged in April, closing the gap with the backward-looking score.

Some respondents noted that they lack any visibility on the recovery at all over this period and that even if the recovery was to begin soon, passenger volumes are not expected to be fully restored within 12 months.

a) Recent and expected change in traffic volumes • Around 13% of respondents pointed to improving cargo demand in Q1, the lowest share since October 2009. Despite a brief pick up in the drivers of cargo late in 2019, the backward-looking score remains on the downward trend started in early 2019.

Some Airline CFOs and Heads of Cargo commented that the grounded belly capacity had placed downward pressure on volumes, even though demand was resilient (no-change or improvement), particularly for those that shipped medical equipment.

• 61% of our respondents expect the demand for air cargo to decrease in the coming year.

This proportion rose from 16% in January, thus pushing the weighted score below the 50-mark (the level associated with overall expectations of falling volumes) for the first time since the April 2009 survey.

35% of respondents expect cargo demand to increase, indicating that it would recover faster than the passenger market.

a) Recent and expected change in traffic volumes • In April, 27% of respondents to the Business Confidence Survey reported a reduction in their number of staff in Q1 2020, a modest increase over the 24% recorded in January.

While the backward-looking index fell below 50 for the first time since January 2015, this came in part because many respondents shifted from increasing their workforce to freezing it (no-change).

• Looking forward however, an overwhelming majority (80%) of surveyed carriers expect to reduce their employment levels in the coming twelve months, by far the largest proportion in the history of our series.

Respondents pointed to the need to cut costs in order to survive the crisis period and to adapt to smaller operations once the pandemic has been contained and operations resume.

How has your employment level changed? How do you expect it to change over the next twelve months? • Exactly half of the April survey respondents noted a decline in input costs in the past three months, up from 35% in January. Fewer respondents saw input costs increase, pushing the weighted score below the 50- mark consistent with overall falling input costs for the first time since July 2017.

A number of those surveyed mentioned lower fuel and MRO costs, successful cost reduction measures and downscaling of operations as the main drivers for the overall decline.

However, some other respondents noted that their unit costs had actually increased because a similar level of fixed costs applied to fewer flights.

• Expectations for the twelve months ahead follow a broadly similar pattern, with more respondents expecting a reduction in input costs compared to the outcome of the January survey.

Respondents anticipate that lower fuel prices will be sustained on weaker global demand, as well as cost reduction and restructuring programs to continue.

Some airlines expect unit costs will remain unchanged due to the balance of the above cost reductions and the reduced flight frequencies.

How have your unit input costs changed? How do you expect them to change over the next twelve months? 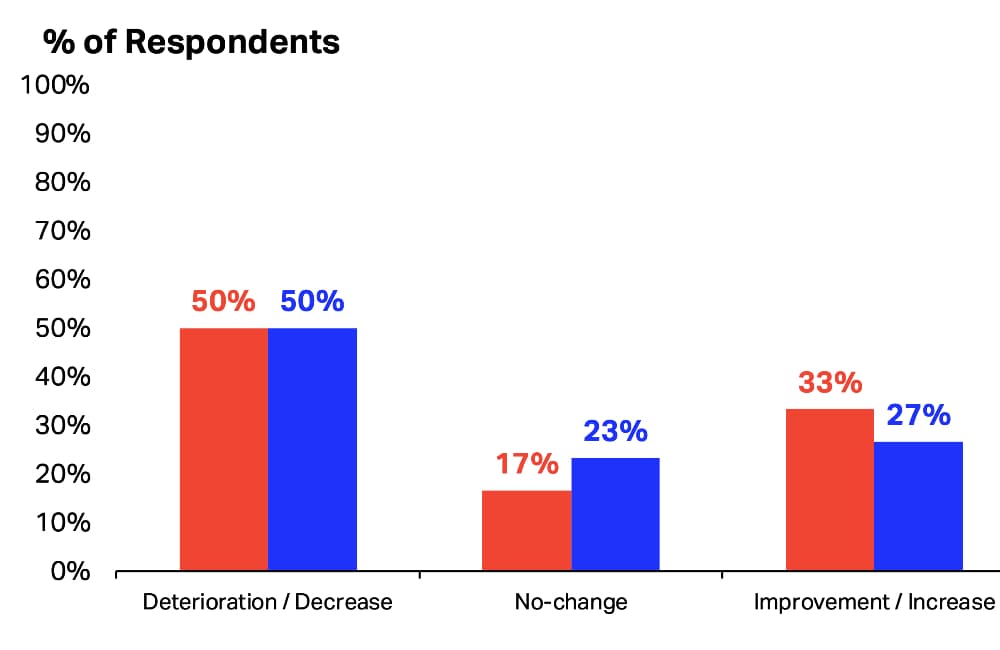 • About one third of respondents to the April survey recorded decreasing passenger yields in the last three months, a higher proportion compared with the January survey (27%).

The share of surveyed airlines posting improving yields also fell marginally, but the weighted score declined only slightly, remaining broadly in line with its level of the past year or so.

Despite the relatively muted developments in yields, airline profitability was significantly impacted through the large falls in demand noted above.

• Looking ahead, however, 73% of surveyed carriers expect passenger yields to fall in the next twelve months, a significant increase from the previous survey (12%) and the highest such share in our series. Respondents point out that the recovery in demand is likely to be slow.

Some of them expect that price discounts will need to be applied in order to help stimulate demand and attract travellers back to the industry, while others mention that social distancing measures (such as not selling the middle seat) may force carriers to raise prices in order to sustain commercially viable operations.

a) Recent and expected change in yields • Cargo yields improved in Q1 2020, with 42% of respondents noting an increase and 13% a deterioration in yields. The weighted index returned above the 50-level for the first time since Q4 2018.

Respondents cited a combination of strong demand and the absence of bellyhold cargo capacity (with the grounding of most of the world’s passenger fleet) as the main drivers of this improvement.

Despite cargo demand falling, freight yields have been more resilient to date and have provided some welcome support to the airlines.

• Surveyed carriers are, however, less positive about the future. Almost half (48%) expect to see a deterioration in yields over the coming 12months – up from 27% in January – as the impact of the global recession takes effect.

Almost 30% expect no change in yields over this period. Overall, the weighted score continues to trend in contractionary territory.

a) Recent and expected change in yields • In the April 2020 survey, we asked Airline CFOs and Heads of Cargo how COVID-19 and related disruptions were affecting their operations, the measures that they had taken in response to the crisis and their views on the recovery. Their replies have been summarized in the charts below.

• Unsurprisingly, respondents have been significantly impacted by the pandemic and the disruption it has brought to the global air transport industry, albeit somewhat less so on the cargo (compared with passenger) side.

More than one third of respondents have seen a decline of 80-100% in their bookings for the next three months, with a further 20% noting a fall between 40-80%. An additional 20% declined to nominate a figure, but indicated that the decline had been ‘significant’.

• In response to the crisis, airlines have acted quickly to implement various cost cutting and capacity reduction programs.

However, the proportion that have permanently reduced the size of their workforce to date is just 10% as airlines first look to temporary furloughs and government support to maintain employment levels.

A majority of respondents (57%) currently expect to see a recovery within 6-12 months. However, a sizeable share (25%) consider that it may take 1 -2 years or even longer.

a) Degree of impact on operations b) Fall in bookings for the coming three 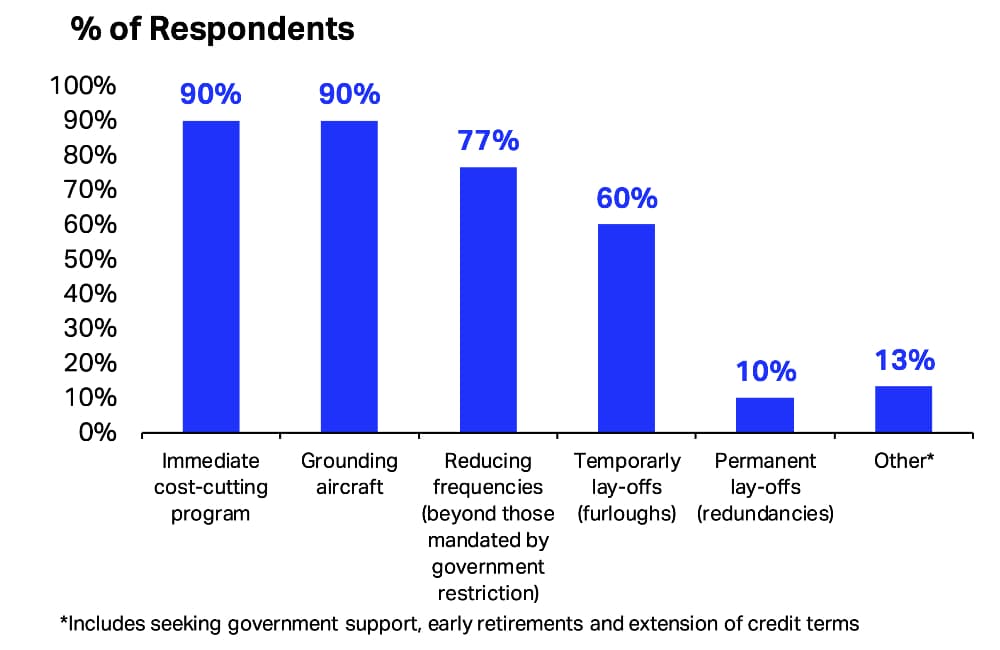 d) Timing of the recovery ➔Contact us now to learn how we can assist you.