The industry has navigated the crisis with some skill, but pressure to cut prices is growing.

For a container shipping industry whose fortunes depend on ever greater globalisation, the coronavirus pandemic appears an intimidating enemy.

Evidence of the disruption to world trade is stark: sailors are stranded on ships thanks to Covid-19 travel restrictions, while containers packed with everything from televisions to clothes have arrived in western ports from Asia just as consumer demand in Europe and the US evaporates.

There are echoes of the 2008-09 financial crisis that sent global trade volumes down more than 10 per cent, ushering in a period of brutal competition between major lines such as Denmark’s AP Moller-Maersk, China’s Cosco Shipping Lines, Germany’s Hapag-Lloyd and France’s CMA CGM.

But a decade on, the early signs point to an industry that has so far done a better job of navigating the upheaval.

The Shanghai Containerized Freight Index, which tracks the freight rates that container shipping lines charge everyone, from the world’s biggest retailers like Walmart to global manufacturers such as Volkswagen, has fallen in 2020 but remains higher than a year ago.

“Not only us but the industry has been very agile in terms of adjusting capacity to demand,” Soren Skou, chief executive of AP Moller-Maersk, told investors on a recent call. Maersk Line operates the world’s biggest container ship fleet.

Shipping lines have, for example, moved to cancel voyages, known as “blank sailings,” on a record scale, according to industry consultants and analysts.

Data provider eeSea said that operators had pulled 8 percent of their sailings this year on key routes — between Asia and North America, Asia and Europe as well as those linking Europe and North America. That compared with 2 per cent for all of 2019.

But six months on from the outbreak of the virus in China and with global unemployment spiralling upward, the urgent question facing the industry is whether it can resist repeating a vicious price war that eventually followed the financial crash and peaked in 2015-16. The stakes are high for a business whose 5,000 ships — the largest of which was unveiled in April, is 400 metres long and can carry almost 24,000, 20-foot containers — have helped lubricate the near uninterrupted growth in world trade.

Seaborne container freight has increased almost every year over the past four decades in a golden era for globalisation.

Lars Jensen, chief executive of SeaIntelligence Consulting, calculated that if container freight rates fell by the same quantum as in 2009, the industry could rack up losses of $23bn this year.

Combined profits at the top-15 container lines were $5.9bn in 2019, according to the consultancy.

However, if rates remained stable, the steep decline in trade volumes that is considered a near certainty this year would only lead to a loss of roughly $800m, a scenario that Mr Jensen believed was more likely.

“That’s real money but it hardly qualifies as a disaster — it’s a manageable loss,” he said.

In an effort to secure greater economies of scale following the 2008-09 crash, companies continued to invest in ever larger ships. But when combined with tepid growth in world trade, it resulted in an excess of capacity.

The ensuing pressure on freight rates culminated in the bankruptcy of South Korea’s Hanjin Shipping in 2016, which served as something of a wake-up call to the industry.

One cushion it now has is the relatively small number of container ships under construction. During the financial crisis, the industry’s order book was equivalent to more than half the existing fleet, according to shipping consultancy and broker Clarksons.

Today it stands at just 10 per cent, meaning fewer vessels are set to enter service. 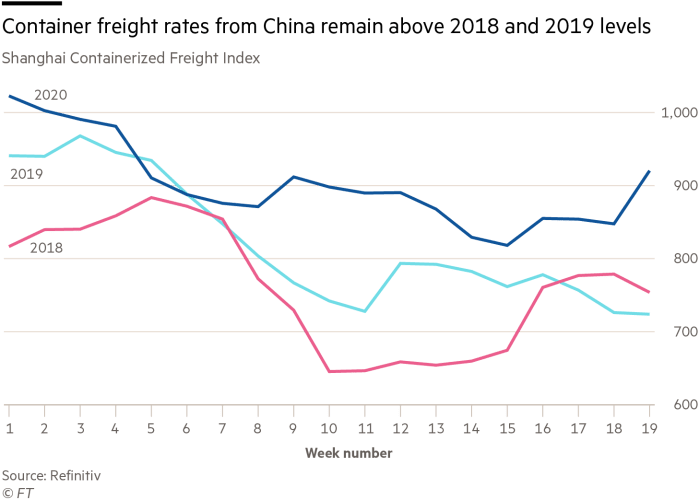 The new-found price discipline among container lines is the product of consolidation and greater collaboration over the past five years, say analysts.

Faced with the drag on trade volumes from the US-China trade war, companies were employing tactics to protect profits even before the coronavirus crisis.

Many lines were already “slow steaming,” or sailing at reduced speed — a tactic that absorbs capacity since more vessels are required to provide the same frequency of service.

Such efforts are not always to the benefit of the customer.

“It’s not so great if you have cargo that you need moved, and the ship you’ve booked on is no longer moving, or it’s been swapped out with another or you’re having to wait until the next ship comes in. That’s a major disruption,” said Simon Heaney at maritime research consultancy Drewry. If the industry has so far proved more resilient than a decade ago, the mood is sober rather than bullish.

The risks were underlined by a recent forecast from the World Trade Organization that merchandise trade, or the import and export of physical goods, will plummet between 13 and 32 per cent this year.

“We see a pretty steep decline [in volumes] right now in the course of Q2,” Rolf Habben Jansen, chief executive of Germany’s Hapag-Lloyd, told investors last month. “We expect it to run somewhere into the third quarter”.

The Hamburg-based group, which has a fleet of almost 250 ships and made profits before interest and tax of over $800m last year, did signal some confidence by keeping its profits guidance for the year, but warned the upper range was likely out of reach.

Maersk, which also operates the terminals from Los Angeles to Lagos that container ships unload at, was more circumspect and has suspended its earnings forecast.

David Kerstens, an analyst who tracks the industry for Jefferies, forecast that container freight rates would fall by about 5 per cent this year but warned even that might be enough to finish off the weakest companies if they did not secure lifelines.

Fourteen container lines, whose combined debt has climbed by a quarter over the past decade to $95bn, are at risk of insolvency, according to the OECD’s International Transport Forum.

“Many of the smaller Asian companies have very high leverage,” said Mr Kerstens. “There’s an increased risk of further defaults, like in 2016.”

It is a spectre that has already led some governments to consider providing financial assistance. CMA CGM last month secured a €1.05bn loan, with the French state guaranteeing 70 percent of it.

For now, the risk of state bailouts disfiguring the sector is a secondary consideration. As with so many industries, the burning priority for container shipping is how quickly demand will recover and what its new normal will look like.